This story appeared in the July issue of the society's newsletter, News 'n Notes. We received a request to re-publish it in our blog so it would be available to a wider audience, and the author, Karen Goode, granted her permission to do so. Here is the article in its entirety.

The St. Louis Genealogical Society recently had the pleasure of helping Branko Stivic locate his ancestors in the St. Louis area and in Chicago. It was a rewarding experience for us and for Branko, who was fulfilling a request from his mother, Barbara Stivic née Blumenschein, to find out what happened to her sister, Marika. What we found was thrilling for his mother and for Branko.
Spurred by his mother’s request, Branko emailed the St. Louis Genealogical Society from Croatia at the end of March of this year. He said he worked as a park ranger in the Park Maksimir in Zagreb, the capital city of Croatia. He was going to attend the 8th International Ranger Federation World Ranger Congress in Colorado, in May, and was planning to come to St. Louis the first week of June for a couple of days. Branko requested our help in finding information about the Blumenschein family that were at one time in St. Louis.
He told us that his mother’s grandfather Karlo Blumenschein met and married his wife Barbara (Hummel) in St. Louis. They had eight children, including a daughter named Marika, who was born here. Karlo’s brother, Peter, had a shoe repair store at 4383 Natural Bridge Avenue in St. Louis. Karlo and his wife Barbara returned to Croatia, where they are buried. Marika Blumenschein came back to the U.S. and married a man named Glazer. Then the family lost track of her.
A team of volunteers at StLGS began to assist Branko even before he arrived at our office. Using online sources first, Viki Fagyal found a death certificate, passenger manifest, censuses, and street directories for Peter within a few hours. Viki also found notices of Karlo and Barbara’s marriage and Peter’s death in newspapers.
When Branko arrived at the office, we printed out several documents for him and then Ed Dolata, Kathy Franke, and I took him to the Missouri History Museum Library and Research Center. Ed had contacted Molly Kodner, an archivist there, who assisted us with finding maps to show where Peter Blumenschein had his shoe repair shop on Natural Bridge. We also found information in the street directories for both Peter and Karl Blumenschein.
The next day, Bob Goode and I took Branko to the History and Genealogy Department at St. Louis County Library Headquarters, where we found the marriage certificate for his great-grandparents, Karl Blumenschein and Barbara Hummel. We then visited the Croatian Catholic Church in Soulard and toured some of the streets that we had identified in the street directories.
After Branko went back to Croatia, out of curiosity about his family history, I found the immigration record for Marika Blumenschein, who came back to America in 1928. She listed her uncle, Peter Blumenschein, as her destination. I also found census records for her and her husband, who were living in Chicago in 1940.
On a whim, I decided to check out the public family trees posted on Ancestry.com, and this is where I found Judith Blochowitz, the daughter of Frank, the oldest son of Peter and Marika/Maria/Mary Glazer. I contacted Judith, and now she and Branko are communicating, sending family pictures to each other, and eager to learn about their family in America and in Croatia. Judith was very excited to hear of her Croatian family. She had recently completed a DNA study on Ancestry hoping to find her Croatian ancestors!
Karen Goode 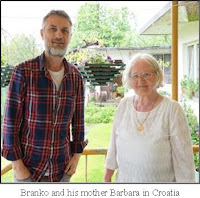 Branko speaks and writes some English, which made helping him a bit easier. Although we are not in the habit of doing genealogy for our members, we do pitch in when visitors arrive from Europe and are not familiar with our records and repositories. Branko was delighted with the success he had and it was wonderful to meet him and to reunite him with his American relatives.

The response to our Summer Speaker Series has been overwhelming, leading us to move the all-day workshop in July from our office to a new location to accommodate the increased number of participants.

If you tried to register and saw the "Sorry, we are full" sign, we apologize, but it took a bit of time to get the venue changed. We are now delighted to announce that we will hold the Summer Speaker Series at Orlando Gardens in Maryland Heights and we welcome all of you to register!