So Many Things to Remember!

This week's blog is a reminder of three special genealogy events you don't want to miss. With so much going on this busy springtime, it's easy to let things slide. Pre-registration (save money!) is open now—but only for a limited time—for the following:

2019 Summer Speaker Series: Your Family Stories: What DID They Say? 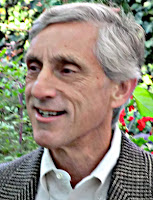 Your day includes all four lectures plus lunch. Registration booklet and more details on our website. 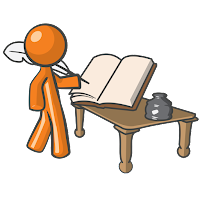 2019 Summer Writing Institute: Are You Ready to Write Your Family History?

You can learn more about the Institute and how to register on our website.

Save $15 by registering for both the Speaker Series and the Writing Institute together. Both registration booklets have the combination price and you can register online at our secure store.

Pre-registration ends 30 June. You save $100 and can take part in all pre-trip preparations if you register by that date. More information and a four-page registration flyer are on the StLGS website.
Posted by St. Louis Genealogical Society at 10:29 AM 0 comments

One of the most important goals of St. Louis Genealogical Society is to educate people about genealogy. To that end, we teach classes, hold monthly meetings, and host special genealogy events throughout the year. We also publish our Quarterly journal, some CDs, and a series of booklets and monographs. As we prepare for the upcoming National Genealogical Society's annual conference in May, we have been revising some of our publications and they are now available on our website and in our store.

Are you an StLGS member? One of your benefits of membership is free PDFs of monographs written on a variety of topics. Recently revised editions of three of our most popular monographs are just a click away. "Understanding GEDCOM and Posting Family History" answers many questions about what GEDCOM files are, why they are important to your genealogy research, and how to create them. "Genetic Genealogy and DNA Testing" is meant for those just starting out and explains some of the basics of DNA.

At the April StLGS meeting, many people were extremely interested in archivist Diane Everman's excellent suggestions on how to preserve paper documents and photos. If you are looking for more help on that topic, try "How to Protect Valuable Family Treasures: Papers, Books, and Photographs" for pages of solid advice on keeping your precious items safe.

To download your free PDF, log into the StLGS website with your member number and your password. Then, on the home page, click in the gold button that says "Member Benefits." Scroll down to the "Monographs for Members" link and check out the selection.

Not a member? You can still purchase paper copies of most of the monographs in our store, and, of course, we will have them with us at our booth at the NGS conference in a few weeks.

Monographs in the Store

Did you know that the Missouri State Archives has a massive database on their website holding information on Missouri soldiers who fought from the nineteenth into the beginning of the twentieth century? Called The Soldiers Database: War of 1812–World War I, it contains information, according to the website, on more than 576,000 Missourians "who served in the military from territorial times through World War I. . . . The records primarily consist of individual service cards, but the extensive collection also includes muster rolls, special orders, reports, and more."

The service cards were originally created "to collect historical and statistical information about the men and women who served in the military." The information on them was abstracted from original records and maintained by the Missouri Adjutant General's office until they were transferred to the Missouri State Archives. The original cards contain a wide variety of information, including description of wounds, dates of enlistment, service, and discharge, and, of course, personal data.

The Soldiers Database includes entries for twelve wars and military engagements, from the well-known, such as the War of 1812, the Mexican War, the Spanish-American War, and World War I, to the "battles that were peculiarly Missourian, including the Heatherly War of 1836, the Mormon War of 1838, and the Iowa (Honey) War of 1839. The bulk of the service cards, more than 380,000 of them, record the fractured history of Missouri during the bloodiest of all American wars—the Civil War." There are descriptions of all the wars on the site.

The database can be searched by soldier's name or unit. Digital images of original service records are linked for many of the soldiers; however, not all.

Begin your search by placing either a surname or last name, first name into the search box. You will get a list from which to choose that gives you names, wars, and some description. Next, click on a person of interest and you will get a screen like the one below. If there is a button at the bottom next to "Image" so you can view the record, click on the button. A PDF will download to your computer. In this case, notice the interesting information on the soldier's Civil War record on the white card below. 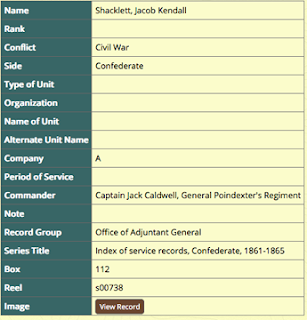 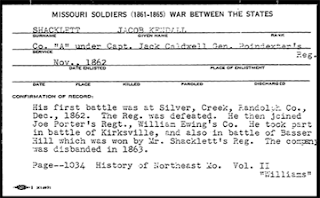 Ready to search? Here is the URL:

Have you heard of the St. Louis Genealogical Society's First Families program? Most genealogists are familiar with lineage organizations such as the Daughters of the American Revolution (DAR) and the Mayflower Society, but what if your ancestors arrived in America after the Revolutionary War? What if your people were among the hardy pioneers that migrated west during the days of the Louisiana Purchase or the War of 1812? What if they came to St. Louis during the Irish potato famine, the European wars of the mid-nineteenth century, or the American Civil War? How do we honor those brave and daring settlers to our region?

The First Families program of the St. Louis Genealogical Society offers you the opportunity to identify, recognize, and archive the lineage of your early St. Louis ancestors. If you descend from one of these families, the First Families program is a way to preserve and honor your family's longevity and the intrepid spirit of those who explored and settled this vibrant city.

Ready to find out more? Information about the program (including a PDF of the informational booklet), the documentation required, and a step-by-step guide through the application process is
on the StLGS website.

Questions? Send a note to firstfamilies@stlgs.org or call the StLGS office at 314-647-8547 during our regular business hours (Tuesday, Thursday, Saturday, 9 a.m. until noon, Central Time) and ask for Diane.


(Thanks to Diane Broniec and Viki Fagyal for their help in writing today's blog.)

Posted by St. Louis Genealogical Society at 10:40 AM 0 comments

Happy spring! We hope you will take advantage of the longer days and warming weather to attend some of our interesting April genealogy meetings and events.

More information on all of these classes on the StLGS website.


National Genealogical Society (NGS) Annual Conference
Wednesday–Saturday, 8–11 May 2019
Journey of Discovery
Special seminars on Tuesday, 7 May on Irish and African American research
You can get more information and link to the conference registration on the StLGS website.