Missouri Militia in the Civil War

(Many thanks to StLGS treasurer, Viki Fagyal, for submitting this week's blog post.)

Did you have an ancestor who served in the Civil War, but not in the Union or Confederate Army? Maybe they served in the Missouri Home Guard or the Enrolled Missouri Militia (EMM)? Did you know there were two groups?

There were other groups formed in different years:
Your ancestor may have served in one or more of these militia groups.
Records are available at the Missouri State Archives and Missouri Historical Society.  Research collections are also available in the History and Genealogy Department at St. Louis County Library Headquarters and in the Downtown St. Louis Public Library Genealogy Collection.

If you want to read more about the Missouri Militia in the Civil War, there are several good online resources:

“Life of a Home Guard and Enrolled Missouri Militia,” For Educators: The Civil War in Missouri, The Missouri History Museum, 2011, http://www.civilwarmo.org/educators/resources/info-sheets/life-home-guard-and-enrolled-missouri-militia.

If you have Canadian ancestors in your family tree and you are looking for online assistance with your research, the best place to get started is the wonderful website of the Library and Archives Canada (LAC). Start on their home page to learn more about the records they have and/or to submit information to their ongoing Canadian heritage projects. Across the top is a tab bar, and by hovering your mouse over a tab, you will see the drop-down menus in each category. For instance, in the illustration below, you can see the contents of the Discover the Collection tab. 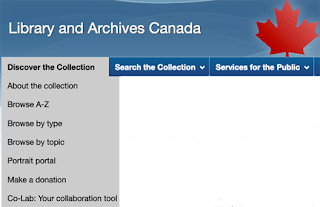 Of course, you can explore, but if you want to go directly to their genealogy offerings, you can do so on their "Genealogy and Family History" page. Here is where you will find databases, sources for research by topic (census, military, immigration, etc.), and sources for genealogy research by location in Canada. There are also links to searching archival records, published sources, digitized photos, maps, and records specific to different ethnic groups. Instructions appear on that page on how to access the records and how to visit the actual library, which is located in Ottawa. You will also find contact information and ways to request assistance.

The "Links and Related Research" page is exactly what you need if you want to look for specific resources by Canadian province or by other countries. You will find dozens of links here to genealogical and historical societies as well as libraries and archives (including religious archives of all faiths) across Canada and several other countries.


Canadian Museum of Immigration at Pier 21

Another helpful resource, the Canadian Museum of Immigration at Pier 21, is located in Halifax, Nova Scotia, and also has an interesting website. The museum occupies part of the pier that functioned as an immigration station from 1928 to 1971 and a departure point for about half a million Canadian soldiers during World War II. As you did on the previous site, you will want to explore the drop-down menus on the tab bar.

The selection under the Research tab will be especially helpful in learning more about what is available and how to access it. Unlike the LAC, this facility does not have actual records; however, they are happy to assist you in finding what you need and in answering questions. If you or your family are recent immigrants and have stories to share, this museum has an active oral history project and instructions for submitting digital files are also under the Research tab.

(Thanks to StLGS volunteer, Barb Ilges, for alerting us to this helpful website.)


Posted by St. Louis Genealogical Society at 9:50 AM 0 comments

Genealogists and historians have good news to celebrate this week, as Tom Ott, director of St. Louis County's Department of Parks and Recreation, announced that the position of county historian has been filled. Beginning today, Monday, 14 October 2019, Guinn Hinman will be the Historic Sites Manager of St. Louis County Parks. In a press release, Mr. Ott said that Ms. Hinman has a "strong background of both management and historic preservation." 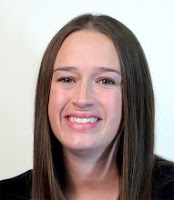 Ms. Hinman comes to St. Louis from North Dakota where she was the northern region sites manager for the North Dakota State Historical Society in Bismarck. During her five years there, she managed twenty-seven historical sites. Working with government and civic groups, she was an integral part of the restoration of the state's oldest courthouse in Stutsman County.

Ms. Hinman arrived in St. Louis this spring and has been working for the Missouri State Park system. We join with the Parks Department and other history/genealogy groups in our area in welcoming her and wishing her much success in her new job.

Two genealogy-themed television shows are returning to network television in 2020.


Finding Your Roots on PBS
Henry Louis Gates Jr.'s "Finding Your Roots" teased its sixth season on Tuesday, 8 October, with a new episode on PBS (locally KETC, Channel 9) featuring Mia Farrow, Angelica Huston, and Isabella Rossellini, and will air another new episode, with Melissa McCarthy and Eric Stonestreet, tomorrow, Tuesday, 15 October (KETC, 7:00 p.m., Central Time). Expect some older episodes to rerun before the show returns with a whole new season in January. No schedule has been posted yet, but one episode features one of St. Louis's own.

StLGS's "Ask Louie" volunteers were excited to help with an upcoming segment on Olivette native and Mary Institute/Country Day School graduate, award-winning actor, Sterling K. Brown. Be sure to watch for the start of Season Six, featuring twenty-seven celebrities in eight episodes during the winter and then six more episodes in the fall. Read more about the new season here. And, if you missed last week's episode, you can catch it on Channel Nine's website. It's free!


Who Do You Think You Are? on NBC
An American take on a British original, "Who Do You Think You Are?" ran on NBC for a few seasons before the network dropped it. Picked up by cable station, TLC, it had a successful run for several more years. A few months ago, NBC announced the popular show would return to its network for its eleventh season. The network has ordered thirteen new episodes but has not announced a debut date or time slot. You can read more about the return of this long-running genealogy show in Dick Eastman's Online Genealogy Newsletter from May 2019.

Fun with Words in Genealogy

Did your Scottish ancestors have a pair of cod-heads? Perhaps your American ancestors helped lay a corduroy road or worked as a whitewing? German ancestors? Did they wear osnaburg or ticklenburg?

Language changes over time and our ancestors would be equally befuddled if they heard someone say "My bad" or "Catch you later" or any of the countless words and phrases we use today. Making sense of today's vocabulary is easy enough, but what do you do when confronted with words and phrases that are no longer in popular usage?

Consult a book—there are some wonderful book references that a generation of genealogists have come to rely on:
Check the internet—lists of archaic words and phrases abound online. Here are just a few to get you started.
(By the way, if your ancestor had cod-heads, he/she was likely from the Glasgow area of Scotland and had some shoes that wore out at the toes. A corduroy road was made from tree trunks laid side by side over a swampy or muddy area, and a whitewing was a street sweeper in a white uniform (see the illustration above). Osnaburg and ticklenburg were kinds of cloth made in Germany. Both were made of linen but the latter was more coarsely made and twice as strong.)

Posted by St. Louis Genealogical Society at 10:57 AM 0 comments