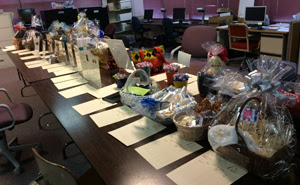 This coming Saturday, 3 March, will be the StLGS annual Trivia Night, our largest fund raiser of the year. As always, one of the highlights of the evening will be the silent auction, and our very busy Trivia Night volunteer committee has solicited donations from a wide variety of local businesses and individuals for this year's auction baskets. As you can see, there will be a lot of them!

Each basket is filled with goodies that are sure to delight potential buyers. The bidding forms will have minimum bids to start you off, and from there, just keep those bids coming. We know you will be delighted with the interesting items in the baskets. And what a fabulous, fun way to support your favorite genealogy society. Here are just a few samples to whet your appetite. 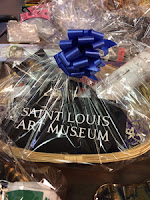 This basket contains a one-year membership to our world-class art museum, an art catalog, some branded souvenirs, a John Pils poster, a book on women photographers, a book on Matisse, and an art museum tote bag. 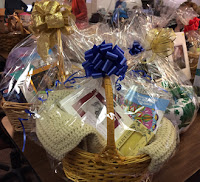 The focal point of this basket is a beautiful hand-crocheted lap blanket made and donated by StLGS member, Kathy Dickey. Also in the basket find some soothing soap, a lovely picture frame, and an adult coloring book. 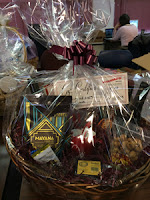 Always a generous donor to our Trivia Night, Woodard's has provided a $100 gift certificate for their expert rug cleaning service. While your house is being perked up, you can enjoy some bottles of wine, and the chocolate, cheese, crackers, and more in this handsome basket.


Are you excited yet? Trivia Night is this Saturday, 3 March, at the Richmond Heights Community Center, just a half block south of Highway 40/Interstate 64, east of Hanley at 8001 Dale Avenue. There are still tables and individual seats available. You can register online on our website and get driving directions on the site, too. Go to https://stlgs.org/events/trivia-night for everything you need to get you there. We look forward to seeing you and having your support.
Posted by St. Louis Genealogical Society at 6:05 PM 0 comments

"Headlines of History" at the Mercantile Library

Newspapers are the most fascinating of resources for genealogists. Nowhere do we find out more about our ancestors than in the pages of newspapers, often filled with juicy gossip, changing social mores, advertisements that show us what everyday life was like, and photos of the communities and people with whom our ancestors interacted. Of course, many newspapers are now digitized and online, but to get a sense of what many of the earliest newspapers looked like, why not plan a visit to the Mercantile Library's newest ongoing exhibit, "Headlines of History: Historic Newspapers of St. Louis and the World Through the Centuries at the St. Louis Mercantile Library Association"? 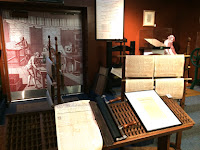 Like all of Mercantile's major exhibits, the scope of this massive display is overwhelming, so give yourself plenty of time to do it justice. Beginning on the west side of the lower level with a mock printing office from the eighteenth century, the exhibit covers a chronological look at newspapers in general and, eventually, specific to the St. Louis area. Pick up a free copy of the "Exhibition Checklist" to better understand what you are looking at and then feast on the variety of printed material on display. Don't miss the first known issue of the Missouri Gazette, the oldest newspaper printed west of the Mississippi, and an issue of the Pennsylvania Ledger, from 13 July 1776, which contains the first printing of the Declaration of Independence in a newspaper. Learn about ethnic and specialty papers in St. Louis, about comics and photojournalism, and about some of the famous journalists who lived and worked in St. Louis. Reflect on how history has been captured in headlines for hundreds of years, while you marvel at the treasures being preserved at the library. Remember that Mercantile Library is the oldest library west of the Mississippi River. 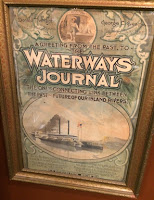 "The Headlines of History" will run through the rest of this year and into late summer 2019. The Mercantile Library is located within the Thomas Jefferson Library on the north campus of the University of Missouri-St. Louis. The newspaper exhibit is free during library hours: Monday through Thursday from 7:30 a.m. until 10:30 p.m., Friday from 7:30 a.m. until 5:00 p.m., Saturday from 8:00 a.m. until 4:00 p.m., and Sunday from noon until 8:00 p.m. (If you are planning to research, however, hours are more restricted. Click here for complete information.) Parking is available in the West Parking Garage. There are a limited number of spaces designated for the library, but if those are filled, you can obtain a daily parking pass for a nominal fee. Get directions and information about parking by clicking here.


🔷
StLGS projects director, Carol Whitton, had some good points to make about last week's blog entry. She wanted to remind everyone that neither the DAR Revolutionary War Index nor Find a Grave are complete. Carol said the DAR index "includes those who have been proven by a DAR member." There are separate officers' indexes in book form, which might have provided more thorough information. Also, there may be more burials in the West Point cemetery than what is shown on Find a Grave, including those without stones. So while it is unlikely that the officer mentioned in the family story was actually Ted's ancestor, there are still a few more steps that he might take to prove it.


Posted by St. Louis Genealogical Society at 10:25 AM 0 comments

(Our guest author this week is again Dr. Ted Bainbridge, who has written a series of articles on what he has learned from researching his wife's and his own family stories. We published his first article in November 2017. If you missed it, be sure to look in the archived files you will find on the right side of the StLGS News Flash home page at stlgs.blogspot.com/. We hope you pick up some good ideas for your own quests based on what Dr. Bainbridge has written.)

Researching a Family Tradition about the Revolution
by Ted Bainbridge, Ph.D.

When Benedict Arnold betrayed the Revolution by giving military information to the British, the army officer who received the information from him was Major André. The major was caught, court-martialed, and hanged as a spy. A family tradition says one of our ancestors ordered the hanging.

“English” was my mother’s maiden name. Shortly after beginning to research our family tree, one of Mom’s distant cousins sent me this in a letter:

Another interesting thing is when Benedict Arnold gave the plans to Major Andrea the Man who was Presiding Officer at the trials was our relation. He Was Brevet Gen. Alexander English who ordered Major Andrea Hanged––He is Buried in West Point cemetery. I visited his grave Many times when I was stationed at the “Point” in 1924 to 1928.

Let’s see how many of those claims we can prove or disprove.

The title sounded targeted to my search, and archive.org is a collection of documents. Selecting the item showed it to be a book, described as follows:

Originally published: Proceedings of a board of general officers held by order of His Excellency Gen. Washington, commander in chief of the Army of the United States of America respecting Major John André, adjutant general of the British Army. Philadelphia : Francis Baily, 1780. 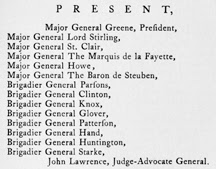 The André incident took place in 1780, so this item was prepared very near the time of the incidents it describes. The website offers full-screen images of the booklet as well as downloads of the document in several formats. The prefatory material includes the cover letter used to transmit these proceedings to the Congress. That letter says the major was hanged on 2 October 1780. After the prefatory material, the first page of the booklet names the members of the court martial board. (See image). So we see that the presiding officer was not named English or anything like that. There was no such person on the board, and so he could not have ordered the hanging.

2. The Daughters of the American Revolution Patriot Index shows no English or any name like that with a rank above lieutenant. There WAS no Brevet General Alexander English.

3. The proceedings end with a report to General Washington that Major André, “ought to suffer death.” That recommendation was followed by the signatures of every member of the board. Thus, the board as a body recommended the execution to George Washington. That he accepted the recommendation and ordered it to be carried out is proven by the fact that André was hanged. George Washington ordered the hanging in spite of the major’s request that he be shot. (That request letter is transcribed in the appendix material following the proceedings.)

4. Our relative said he visited that grave at “the Point,” meaning West Point, which is in New York. Searching the website, Find a Grave, for Alexander English, buried in New York, produced a hit list of three names. Only one is buried at the United States Military Academy Post Cemetery, which is West Point. He died in 1840, aged twenty-three. So he was born in 1817, which was thirty-seven years after André was hanged. He did not participate in the André incident. The tombstone does not say he was a general, and that is highly unlikely for a man only twenty-three years old. [Editor's note: A photo of Alexander's tombstone is on Find a Grave. You can see it by clicking here.]

So we discovered that: (1) The presiding officer of the court martial board was named Greene, not English. (2) There was no Revolutionary officer named English or anything like that above the rank of lieutenant. (3) The board recommended death and Washington ordered the hanging. (4) The man buried at West Point did not participate in any events related to Major André. (5) Every claim in this family tradition has been proven false!

Some Upcoming Events in the St. Louis Area

We'd like to give you a heads-up on three interesting events coming up in the next couple of weeks.

The Bridgeton Historical Commission/Society is holding an "Indoor Fee Fee Cemetery Tour" on Thursday, 15 February 2018 from 6:30 to 8:30 p.m. at the Bridgeton Recreation Center, 4201 Fee Fee Road. This is part of the society's speaker series. For directions to the center, click here.

"From Franklin to Pulitzer: Pioneer Newspapers and News Pioneers" is the title of an all-day symposium on Saturday, 17 February 2018, at the Mercantile Library in St. Louis. Eight speakers from throughout the country will deliver presentations on all aspects of newspaper history. The keynote speaker will be James McGrath Morris, author of a New York Times best selling biography on Ethel Payne, "first lady of the black press." The program begins at 8:00 a.m. and concludes at 4. Lunch is included. Tickets are $95 and pre-registration is required. For more information on the symposium, click here. To register, call 314-516-7248 or send an email to Amanda Schneider at amandarschneider@umsl.edu . Saturday parking is free and open on campus. The nearest lot is the west parking lot. For directions to Mercantile Library, click here and download the north campus parking map.

The O'Fallon, Illinois, History Museum is holding an Open House on Sunday, 18 February 2018 from 2:00 p.m. until 5 to celebrate the opening of a new exhibit on coal mining. A young Eagle Scout, Tommy Fulford, spent a year building this display, which includes coal mining artifacts and tells the history of coal mining in the O'Fallon area. The museum is at 101 W. State Street. Click here to learn more about the society. Click here for a map and directions.

◈
And, of course, our own society events: