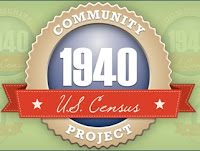 The Missouri State Archives sent out an official press release on Wednesday, 15 August, announcing the opening of the index to the 1940 census. The press release states that the index was created "largely through the efforts of Missouri State Archives volunteers, in conjunction with FamilySearch, the largest genealogy organization in the world, as well as the St. Louis Genealogical Society, the Missouri State Genealogical Association and smaller societies from across the state." After downloading images of the actual census pages, volunteers entered information into a web-based computer application created by FamilySearch. The 218 volunteers who registered with the Missouri State Archives entered more than 1.6 million records, "earning the honor of the number one, most productive indexing group in the entire country. Incredibly, an index to the 3.8 million people living in Missouri in 1940 was created in just over three months."

Secretary of State Robin Carnahan added, “Our volunteers did an outstanding job creating this index. Thanks in large part to their efforts, Missourians and family historians around the world can now easily search for every person living in Missouri in 1940 and then view digital images of the original pages on which they are found. It is truly an amazing resource for those attempting to learn more about their family or community history.”

For an interesting page of famous Missourians in the 1940 census, you can click here: http://www.sos.mo.gov/archives/resources/census1940_famousmo.asp

And, although the census indexing project is over, the Missouri State Archives still could use volunteers to help on other projects. You can call 573-526-6711 or send an e-mail to archvol@sos.mo.gov if you are interested.