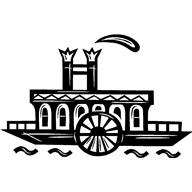 Another new set of data on our website is coordinated with the articles on steamboats that appeared in the summer 2012 Quarterly. Due to space limitations, we were unable to print a long list of steamboat workers in the 1860 census and another set of databases of men who were masters, pilots, and engineers based in St. Louis in 1854, 1857, and 1915. Our webmaster, Jim Bresnahan, has created a new category for us under the Research tab on the home page. Go to Life and Death and then Occupations. You will find the new databases on the page that opens.

We also need to correct one sentence from our last blog. We did not clearly state that the issue of the St. John Nepomuk Messenger that is online is a special anniversary issue of the Young Men's and Young Women's Sodalities. This is not the church's anniversary issue but that of the two young people's groups. We are sorry for any confusion this might have caused.
Posted by St. Louis Genealogical Society at 6:56 PM