(Thanks to StLGS treasurer, Viki Fagyal, for this week's blog post. Do you have an interesting story to share about early St. Louis history? If so, please share!) 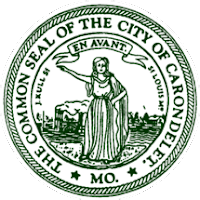 Clement DeLore de Treget founded the village of Carondelet in 1767 on a trip upriver from Sainte Genevieve. Other French settlers from Cahokia and Kaskaskia joined DeLore to form the village. At first called DeLore's Village, it underwent several name changes such as Louisburg, Prairie a Catalan, and finally, in 1794, Carondelet in honor of Baron François Louis Hector de Carondelet, the Spanish governor of Louisiana.1 St. Louis City dwellers affectionately referred to the village as "Vide Poche," meaning "empty pockets," a reference to either the financial status of the inhabitants or to that of visitors departing after gambling losses in Carondelet gaming houses.2 “Carondelet retorted by calling St. Louis “Pain Court” (short [on] bread), for which they found justiﬁcation in the fact that most of the French settlers in St. Louis were traders and trappers, who did not produce a sufficient quantity of grain to supply the local demand, a frequent scarcity of bread being the consequence.”3 The City of Carondelet was incorporated by act of the state legislature on 1 March 1851.4 Carondelet was annexed to St. Louis City by act of the legislature in April 1870.5

Carondelet maintains an active historical society and reference library and welcomes visitors with an interest in the area. To learn more about the Carondelet Historical Society, click here.

Posted by St. Louis Genealogical Society at 10:48 AM